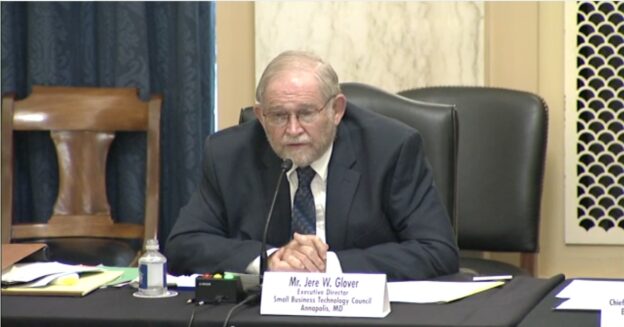 On September 22, The Senate Small Business & Entrepreneurship Committee held a hearing titled “A Review of the SBIR-STTR Program”.  SBTC Executive Director Jere Glover was one of 2 witnesses invited to testify.  During his testimony, Jere touted the 40-year success of the program, highlighting its huge economic impact and the key technical innovations it has generated.  He urged Congress to reauthorize SBIR and STTR as soon as possible, to give small businesses and agencies the clarity and security they need to plan ahead, knowing these important programs will still be around in a few years.

Most of the Senators at the hearing praised the SBIR and STTR programs, and supported its reauthorization.  Ranking Member Rand Paul, on the other hand, strongly criticized SBIR and STTR.  In his opening statement he cherrypicked a handful of SBIR projects that he described as wasteful, reiterated the debunked idea that the bulk of the programs’ spending goes to “SBIR Mills”, and questioning the need for the programs to be continued.  Senator Paul left the hearing after his opening statement and did not have any questions for the witnesses.  Chairman Cardin made it clear he disagreed with Sen. Paul’s portrayal of SBIR/STTR and lauded the programs’ many successes, and offered his support to a speedy reauthorization.  Other Senators at the hearing also offered praise for the program and asked questions about how to improve and strengthen them.

To read Jere’s written testimony, and to view watch a replay of the hearing, click on the links below: